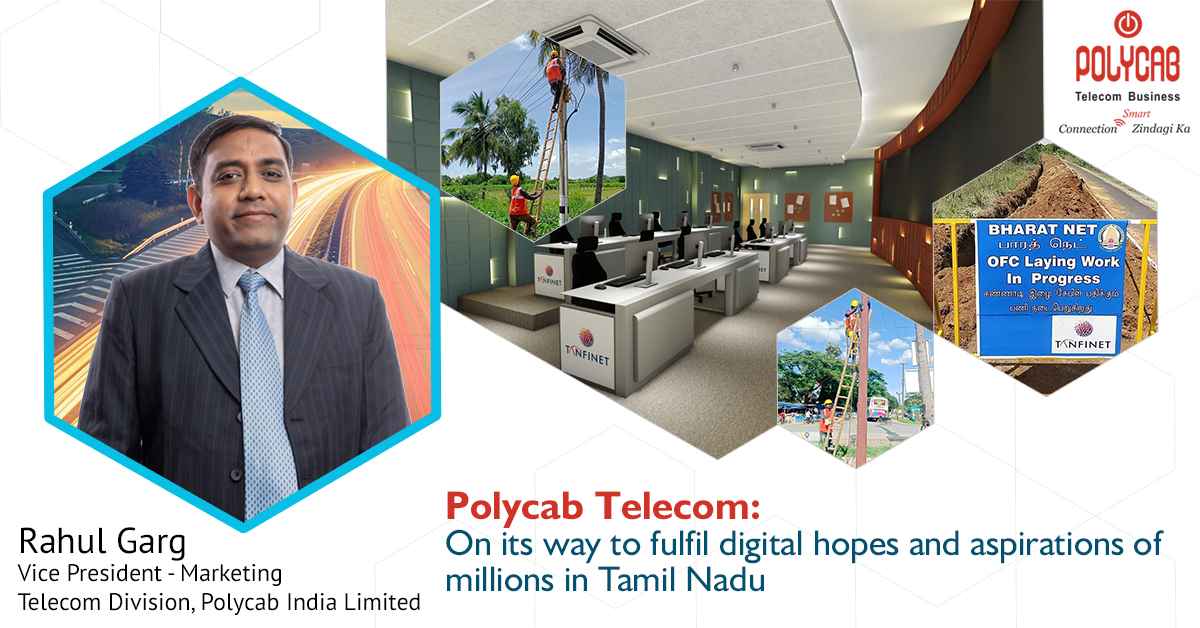 Digital flow of information has stirred fundamental change in living and working world-over. We live in a networked era now. Internet and IoT-based evolutions have made a positive impact on business, education, healthcare and governmental services. Therefore, elimination of digital divide becomes the core for India as a nation to go wholly Digital. Digital India is a great initiative, undertaken by the Government of India with a vision to transform our nation into a digitally empowered society and knowledge economy. By creating an OFC-network in Gujarat and Bihar, Polycab Telecom, a division of Polycab India Ltd., has made a bedrock of internet-connectivity & high-speed data-availability for future digital services for the local people, driving rural empowerment and revolutionized lives there. We’ve laid more than 20,000 kms and connected more than 4,775 Gram Panchayats (GPs) in Gujarat and Bihar, executing End-to-End Network Roll-out for Phase-II of BharatNet, world’s largest rural broadband project.

We’ve already embarked upon one more project under BharatNet Phase-II. BharatNet Project has to be implemented in Tamil Nadu through a State-led model and a Special Purpose Vehicle (SPV) namely, Tamil Nadu FibreNet Corporation Limited (TANFINET), has been constituted for the same. We’ve started to work as a Master System Integrator for TANFINET lately, to implement the BharatNet Phase-II project in the districts, demarcated under Package A in Tamil Nadu. The implementation of the entire project has been divided into four packages, i.e. A, B, C and D, with the recruitment of a Master System Integrator for the Package A and System Integrator for each of the other packages, i.e. B, C and D. As per the agreement, we’ve got to provide end-to-end connectivity with high-speed bandwidth using Optical Fibre Cables in 3,095 GPs in 75 Blocks across 9 districts of Tamil Nadu under Package A. Our scope of work involves site-survey, design, fiber-laying, integration, commissioning and O&M to enable Gram Panchayats in the delineated districts with a minimum scalable bandwidth of 1Gbps. The delineated districts in the state under the Package A are: Chengalpattu, Kancheeipuram, Tiruvannamalai, Tiruvallur, Vellore, Krishnagiri, Ranipet, Tirupattur and Chennai. We would be laying around 13,500 Fibre kms, with almost 85% being overhead and the rest underground, as mandated by the TANFINET. We’ll be rolling out the fibre-network in all the delineated districts with IP-MPLS (Internet Protocol/Multi-Protocol Label Switching) Electronics, a network support that uses the IP Protocol, augmented with MPLS-routing. An integral facet of our responsibility is to set up the State NOC (Network Operations Centre) at Chennai to integrate all the GPs under the project, including the GPs under other Packages, i.e. B, C and D. So summarily, Polycab Telecom would play an instrumental role in the execution of all the packages under the project, by being involved in continuous monitoring of the performance and efficiency of the entire network in BharatNet Phase-II in Tamil Nadu.

previous
Video technology is the fulcrum of Safe City solutions